A scaffolded cloud floating at the edge of Macau City Center, forming a giant water fun palace alongside with Macau tower on the shoreline.

The Cloud – A vast amount of capsule hot springs and bath houses huddle together forming a massive steam cloud that create foggy and cloudy atmosphere on the top of the pavilion. Giant circular sky pool encircles the hot springs and bath houses provide a fun swimming experience in the cloud. The harvested water from the sky pool overflows from it, eventually creates raindrop and waterfall to the sea bath underneath.

The Connectors – Seeking the fun of travelling in between the cloud and the sea, visitors have to climb up the giant staircase to reach the cloud and slide down from waterslide to the sea bath. The hot springs, stairs and waterslide facilities plug into the scaffold structure which allow them to be flexibly changed their forms to adapt any occasion.

The Sea Bath – Enclosing by the circular timber walking deck, the sea bath sits at the bottom attach to the shoreline and the sea. The sea bath catches the rain falling from the cloud, creates an experience of swimming under the rainy cloud. Macau cloud pavilion seeks to engage a sense of playfulness that is deeply informed by playing in water, instigating close encounters between play and social interaction, between fun and flexibility.

The above question has been raised in Macau since the beginning of its gambling industry. Local inhabitants have been largely sacrificed, as the public leisure space are forfeited for the development of casino complexes. In this proposal, we highlighted ground floor as the major conflict between city’s development and local inhabitants. During the past decades, the construction of gigantic entertainment architecture always starts with a huge footprint, which takes up majority of the block with little leftover. The solid facades reject the local inhabitants, while welcoming the tourists.

The future entertainment architecture should be distinct from existing ones. It is supposed to liberate the ground floor space, making it accessible to both tourists and local inhabitants. With the morphological reference of lotus, the symbolic flower in Macau, we propose a cluster of buildings with small footprints and large canopies, thus defining the space in between as public leisure space which opens to both tourists and local inhabitants. The in-between space, which opens up at the bottom while tapoering towards the top, both allows light and keeps out rain. The interconnected ground floor space has multiple orientations, respectively pointing to the landmarks of Macau. The top floor of the buildings are connected with each other, forming a continuous open space for malls, which used to take up the ground floor in the old entertainment architecture. Hence, the vertical spatial configuration has been inverted, which gives freedom and allows possibilities for the ground floor space.

In addition to the traditional programatic combination of casino, mall, hotel and theatre, we are also including medium or small scale auditorium and ballroom, which better serve the local inhabitants. Programs with demands of view and sunlight, including hotel, gastronomy and small theatre, are located to the periphery of the building, while keep the middle to the large scale programs, such as casino, big theatre and ballroom.

Twisted horizontal metal siding is used as the material for the building’s façade. The angle of the siding responds to the needs of the view and sunlight. The chemistry of reflection of metal, strips twisted angle and the subtle shadow will result in an ever-changing and magic pattern of the building, making it recognizable among the unique skyline of Macau.

by Zijing Gao from University of Michigan

The design of the Waterfront Bath Palace examines the irresistible emergence of autonomous vehicles, the logistics of infrastructures and health, and the historical and cultural contexts of Macau. The design operates at three key scales: a car-like chamber and large sensor array – an autonomous driving machine – the new method of transportation, that mediates between biometric and environmental parameters; a third-place space occupying a highway interchange infrastructure that connects to the Ponte De Amizade bridge, it swallows, charges, entertains, processes, and manages the trafficking of actors and objects from pedestrians and bikes to autonomous vehicles and boats; the city of Macau that acts as a central hub of entertainment and emotion, that takes advantage of its unique Mainland China- Macau- Hongkong- Taiwan geopolitical spatial relationships.

The design approach also references “Learning From Las Vegas”, in which the “duck”, casino, speed, and vulgar extravaganza resonate within 21st-century cultures of entertainment and health urbanism. The third-place architecture of pleasure builds upon the Chinese Bath Palace typology that provides everyday health maintenance to cure ills and fulfill desires. The Bath Palace typology emerged from public bathhouse in Mainland China in the late 90s; it has now become an all-in-one space with spaces for activities from dining to massaging, from after hour deal-making to even under-cover sex trades. The new Macau Waterfront Bath Palace design appropriates the Neo-Baroque quality of the original Chinese Bath Palace as a critical mechanism to expand the urban imaginary between vulgarity and pleasure by promoting design strategies that become available given greater infrastructural autonomy. The formal structure and programmatic drive of the Bath Palace start from a metaphorical and figurative heart that morphs into the heart of the city where the exchange of fluids and sensations are compressed and animated.

The Bath Palace sits on site A; it manages the traffic of the Ponte De Amizade bridge with an imaginative newly constructed interchange that connects the Amizade Bridge to road networks of other key geopolitical spaces.

The building promotes daily activities in the city by wrapping up the grey spaces under the highway bridges; this is the space where people walk dogs, make trades, and enjoy a roof over their heads. The autonomous vehicles move into the building quickly, that speed compresses the sense of scale. Many merchandises and arts such as the Chinese screen dividers (the screens are spatial elements of ambiguity) are showcased on the walls. The building has a vehicle shelfing system that manages the cars, a docking system that manages the boats, a variety of restaurants and pubs to have conversations, and a bath palace that serves as the city’s low-key health infrastructure that utilizes spa, massage, and relaxation to cure minor physical and mental discomfort. This Bath Palace is the architectural response to the new urbanism under Macau’s context, the new highway culture evolves around this all-in-one space.

This Bath Palace Transportation Hub offers a new third-space city lounge that is not a casino, the construction of the Gangzhuao (HK-Mainland-Macau) Bridge will bring more vehicle traffic to Macau, this design thinks forward and takes on the mission of challenging new transportation method, which will be a great opportunity to change Macau’s failing connections to its people.

Back To Residents By Cassandra Leong and Alex Fang 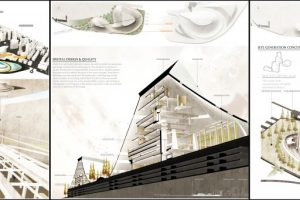 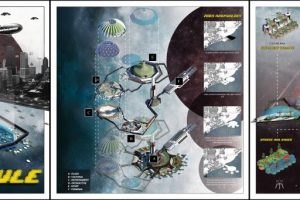 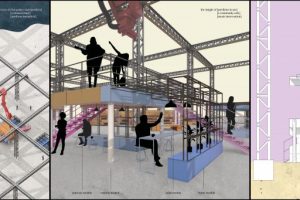 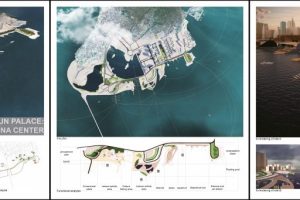 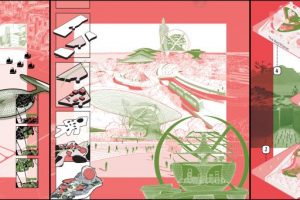 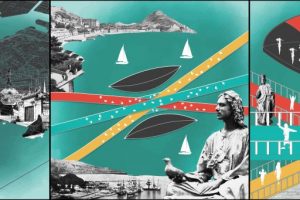 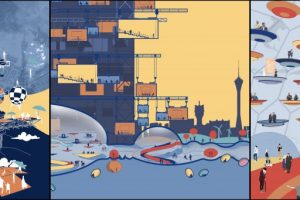 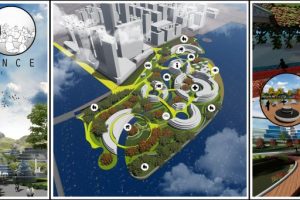 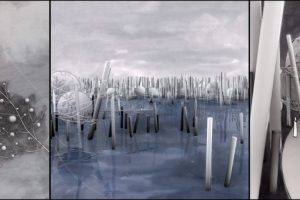 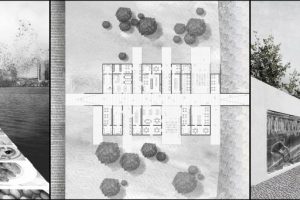 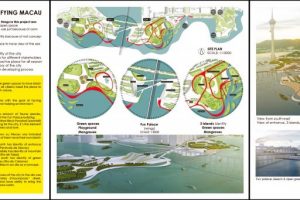 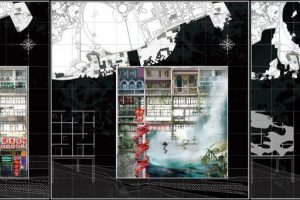 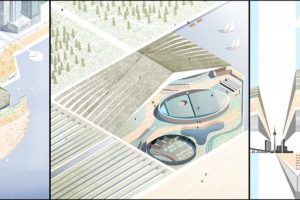 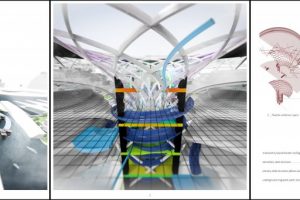 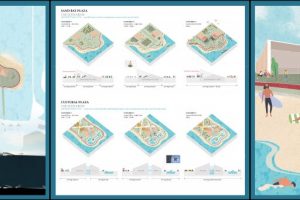 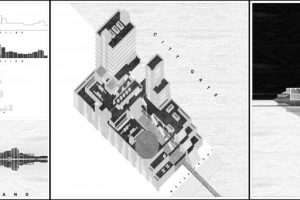 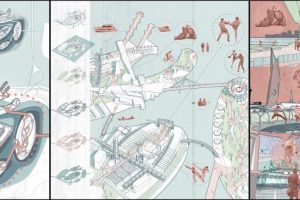 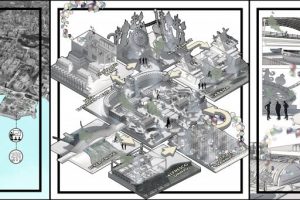 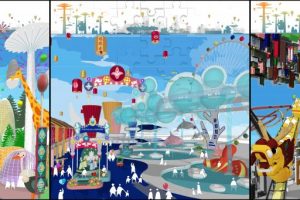 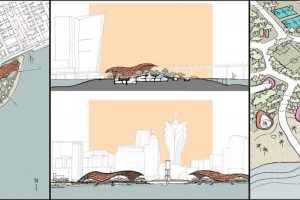 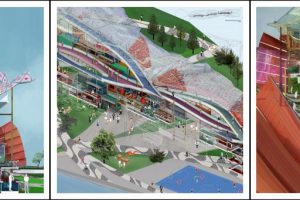 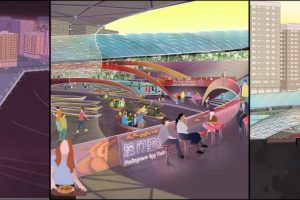 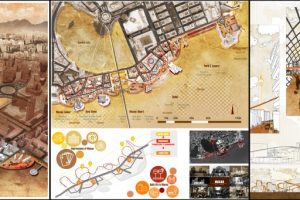 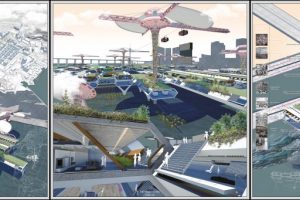 < competition brief    <  back to mOOOtopia

mOOO4 results and donation to WHO

mOOO4 juror Dr. Roger Y.M. Wong appointed as a member of the Order of Canada

Money Raised from #mOOO3 ISO[NATION] Donated to WHO

Subscribe to be the first to get updates on our latest events.